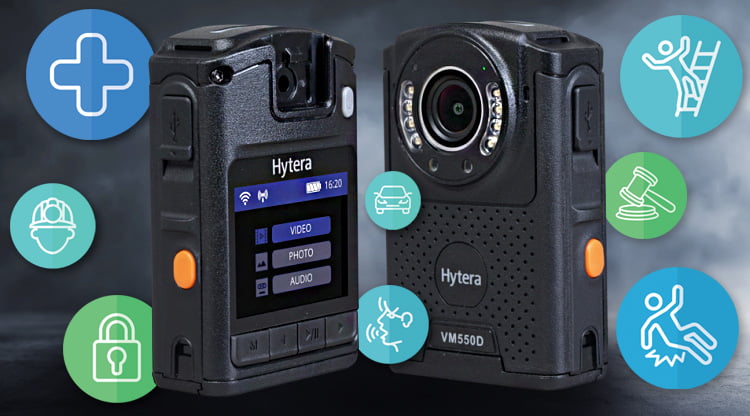 Say Hello to Bodycams – See Everything, Miss Nothing

The latest generation of body worn cameras are one of the most requested add-on devices to make your radio system work harder for you.

A Huge Leap Forwards: The new generation of body worn cameras are much more advanced than their predecessors. Lighter devices that are now stacked with additional features and with longer lasting batteries that can handle an entire shift. HD, infrared cameras with night vision and full integration with other wearable devices are starting to redefine what is possible with a simple to use bodycam unit.

We can advise you how to implement a body worn camera system and what it can do for you.

Get the Full Picture with a Body Worn Camera

Lone workers fill a number of critical positions and play an important role to a number of organisations and businesses.  Statistics from the British Crime Survey showed that up to 150 lone workers are attacked (both verbal & physical attacks) each and every day in the UK. These attacks effect a number of industries and job roles that utilize lone workers.  Regardless of the sector they’re working within, or the comparative risks that they face, it is important that these workers are supported and must be given the best possible kit to enable them to complete their roles as safely and securely as possible. Working alone makes an individual much more vulnerable than they would be in a team when they have to deal with aggressive individuals.

Every organisation & business has a duty of care to their employees.  Lone workers safety requires special attention and management. You will have a lone working policy, the lone worker will require a level of training and will also need to be supplied with adequate personal safety equipment, alarms and visual & audio recorders such as a body worn cameras (bodycams).  They will also need active monitoring to make sure that they are kept safe.

In a 2016 study carried out by Cambridge University, police wearing bodycams received 93% less complaints from members of the public than those without the devices. The twelve-month study was conducted over 1.5 million police hours using 2,000 officers around the country and was one of the largest controlled experiments in criminal justice research. The bodycams proved themselves at being effective at calming down and avoiding potential flash points between the officers and the suspects. Notably, the devices tackle the issue of having very different accounts of the same event from officers and suspects by providing direct and irrefutable visual and audio evidence that can be used in court.

Wearing a body cam has been proven to lessen the aggression faced by the wearer.  The ability to instantly record court-ready evidence will often de-escalate hostility and deter people from being aggressive in the first place.  Many people do not like the idea of their aggressive behaviour being filmed and used as evidence against them thus the bodycam provides an additional layer of protection for the worker.  For those aggressive individuals that won’t back down the accumulation of evidence from a bodycam device can make the difference between a successful and unsuccessful court prosecution of that individual.

The Risks to Your Lone Workers

Along with the risk of facing down an aggressive individual who is threatening violence or being abusive a bodycam can be an ideal tool for dealing with thefts and intruders, driving related incidents and even sudden illness or accidents. There’s a multitude of ways that a bodycam can help you to fulfil your duty of care to protect your most vulnerable workers.  We are seeing many new innovative uses for bodycams as the flexibility of linking modern communications makes it possible to really tailor a communication system to precisely cater for many specific business requirements.

The body worn camera (bodycam) is like a tireless witness that’s with you throughout your shift.  It doesn’t take tea breaks and doesn’t even blink. Every incident and potential flash point can be recorded, or streamed live to a control room or other radio device protecting the company, organisation, and the worker from false complaints regarding their conduct.  When you’re put in a difficult situation to deal with the bodycam can be your best friend who’s there to help you through. Not only will your co-workers get alerted to your position but when evidence is collected and used in conjunction to the other security systems and on-site cameras a body worn camera can allow a court to see a complete and indisputable picture of what actually happened instead of being faced with contradictory witness statements.

Get the Whole Picture

The current generation of bodycam devices have taken a huge leap forward over their predecessors.  The devices are now much lighter with longer battery lives that will last an entire shift. Bodycams such as our Hytera range are fully stacked out with modern features such as full HD video quality, infrared cameras, night vision and full integration with other wearable devices. For example, combining the new Hytera VM780 Bodycam with the PDC760 multimode advanced radio would allow you to stream the footage from the bodycam directly to a separate radio worn by a controller or co-worker. This connection can allow you to get the support you need when you need it.

The bodycam devices cleverly lock the recorded footage with encryption so that it can not fall into the wrong hands if a bodycam is stolen or lost. Only the people authorised to see it will be able to access it.

The heart of running a successful bodycam system lays in the simple to use management software where you can securely and easily manage the recorded footage downloaded from all the devices. This puts you in the driving seat of the system and in control of all the data you accumulate with your video & audio recording systems.

A Camera for Every Occasion

The options as to how to use this technology are so wide ranging so that no matter what you need from a bodycam there is a solution we can provide.  It’s no wonder it’s one of the fastest growing tech sectors in the world and that we’re seeing more and more industries looking to integrate the latest generation of modern bodycams to protect their workers. Contact our radio experts today to find out how a bodycam can help your business.

A typical body worn camera such as the Hytera VM685 (bodycam & remote speaker microphone) is stacked with mission critical security features. With one-hand operation for simplicity and fast access to critical information the Hytera user-interface has been designed with your safety in mind.

Simple menu options can be customised to work for individual employees and allow them the shortcuts they need. The slimline device weighs less than 170 grams and is dustproof and waterproof (IP67) meaning that despite its size it is more than rugged enough to handle even the most brutal & challenging environments.

The 16-megapixel image sensor & six infrared LED’s provide an optimal recording performance from the 180° rotatable 140° wide-angle lens which is initiated with a single touch. Even when recording 4K footage the battery life for constant video will last longer than 8 hours. Using the HD recording function, the battery will last much longer.

With 16GB as standard with upgrade options for 32GB, 64GB & 128GB you can tailor your body worn camera to fit your intended usage. Secure & reliable data transfer is achieved simply by docking the device into the charger. This feature ensures your content remains tamper-proof and secure for when you need it.

Take advantage now, simply call us on 01245 403520 or contact us using the form below. Put us to the test and see what we can do for you, your employees and your business.